Home » Blog » Green Roofs | What Are The Benefits of Rooftop Gardens?

Green Roofs | What Are The Benefits of Rooftop Gardens?

Green roofs are becoming more and more commonplace in Vancouver and across the world. Functionally, they’re extremely useful, offer many environmental benefits, and they look amazing. However, we’ve found that people still tend to question how rooftop green spaces are any more beneficial than other urban gardens or landscapes. This blog aims to explain the unique benefits of green roofs while also breaking down the main categories one can choose to install. 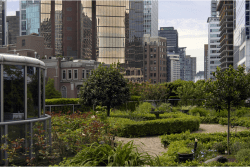 A Brief History of Green Roofs

A green roof (sometimes called a rooftop garden) is defined as any roof that intentionally fosters the growth of vegetation. This can be as simple as a grass roof, but it can also refer to large-scale installations featuring trees, gardens, and hardscapes. 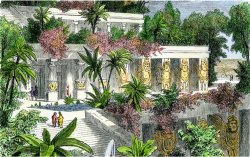 Artistic rendering of the Hanging Gardens of Babylon

Over the last hundred years, green roofs have become hugely important elements of urban areas due to their environmental benefits, such as cooling and stormwater management. Though they’re becoming widespread in cities, the history of rooftop gardens dates back to The Hanging Gardens of Babylon. Other research indicates that it was common to grow trees atop buildings during the age of the Roman Empire.

As cities have grown into large-scale, ever-expanding bastions of industry and commerce, the need for complex, efficient infrastructures has drastically increased. These infrastructures (like sewage, weather management, and electricity) needed to expand as our populations grew; thus, city planners began turning to nature and history for ideas on managing this growth. 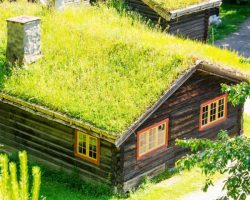 Germany, for example, began building simple, grassy roofs in the late 19th century. Following research and development of new technologies in the 1970’s, green roofs were incentivized and/or mandated in many German cities. Green roofs (both new and old) are widespread in European countries – notably France, Switzerland, and Norway.

Similar things happened in North America, where several major cities including Portland, Chicago, Toronto, and Vancouver began to mandate green roof installations at various points in the 20th century in order to offset costs, manage stormwater, make up for lack of parks, and cool down cities. 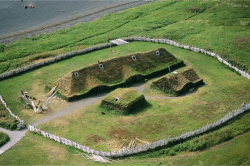 L’anse aux Meadows, Newfoundland. Constructed by Norse Vikings who used sod to insulate houses and buildings. The practice of laying sod on rooftops is still evident in Norwegian towns and cities.

The Benefits of Green Roofs 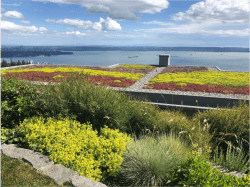 There are 3 types of green roof: 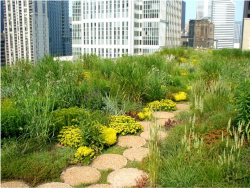 Semi-intensive green roofs are deeper than extensive ones, though they still tend to be fairly shallow. They’ll usually include small shrubs and plants, and may be installed to increase biodiversity or as a shared garden. 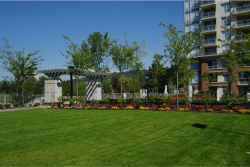 Intensive green roofs tend to be very deep and may include an extremely broad variety of plants and features, including lawns, trees, walkways, pathways, boulders, and more. They’re intended to be park-like spaces for residents to share, and offer many environmental and social benefits.

Famous Green Roofs and Rooftops Gardens in (and near) Vancouver 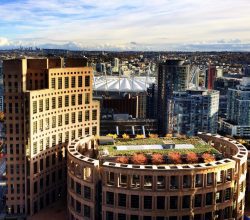 It’s hard to argue against the usefulness and functionality of green roofs. Not only do they provide many, many benefits to building residents, but they also look amazing, adding colours and textures to our city skylines. However, they do require maintenance, and can be costly to install. Moreover, if the waterproof membranes below a green roof ever fails, it can be difficult and extremely expensive to repair.

If you need help maintaining, installing, or fixing your green roof, get in touch today!

How Much Does Landscaping Affect Property Value in BC?

What are Hellstrips? Why Sidewalk Lawns Deteriorate & Improvement Tips