Home » News » How to Prevent Plant Damage by Winter Storms

How to Prevent Plant Damage by Winter Storms

This winter the temperature in Metro Vancouver dropped to a frigid -15 degrees Celsius, the coldest it has been in almost half a century. As a result, some of the plant material in your landscape may have been damaged. Plants are rated by the USDA (United States Department of Agriculture) to tolerate certain temperatures; this is the authority that is mentioned on every plant label that comes from a nursery. Vancouver is classed as a Zone 8a to 8b climate. Some plants, although rated as being suitable for our region, are proving to be unreliable with colder than average winters such as this year’s, thus causing widespread damage to plants. California lilac (Ceanothus), creeping raspberry (Rubus calycinoides), heavenly bamboo (Nandina), and Escallonia are just a few of the plants that are showing signs of winter stress like severe defoliation or complete failure. Furthermore, soil saturation, microclimate and variety also play a role in the plant’s hardiness.

The snowfall has caused other damage because some plants could not sustain the heavy weight of the snow and freezing ice for such a long period of time. Tree limb loss and hedge splaying are clear evidence of the damage caused by the heavy snowfall this winter. Magnolia varieties, Liquidamber, and Cercis canadensis are some of a few trees that became particularly weak once the snowpack was sitting on them, resulting in broken limbs. In most cases we are able to clean up the wound on the tree with corrective cuts. However, in some cases there are trees that had the leader limb break under the weight, in which case removal and replacement may be necessary as the long term health and structural stability of the tree would be severely compromised. Cedar hedges are very susceptible to splaying when poorly pruned. Cedars that are pruned to make the top portion the widest part of the hedge will begin to fall over and split when the snowfall became too great. Pruning hedges in a pyramidal shape has two benefits for cedars. First, the shape being tapered at the top creates a smaller surface area for snow to accumulate on, therefore better protecting it from splaying under the weight. Second, pruning in this method allows more daylight to reach the base of the hedge, therefore promoting healthy foliage growth which in turn looks more aesthetically pleasing. 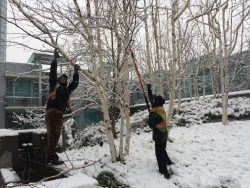 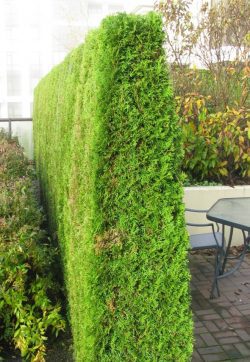