Though Vancouver is home to many famous landmarks, viewpoints, and tourist attractions, few are more widely-visited than Granville Island.

For the past two years, we’ve had the privilege of upgrading and maintaining the landscape on this historical island, and we wanted to show you what we’ve been up to!

Granville Island is more than just a tourist attraction – it’s become a major, essential part of Vancouver culture. Seated about halfway down False Creek beneath the south end of the Granville Street Bridge, Granville Island sees nearly 10 million visits per year – an average of ov 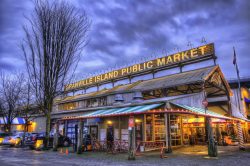 It’s also home to the world famous Public Market, where anyone can easily lose an entire day wandering through seemingly-endless artisanal stores, cafes, and restaurants.

History and Aesthetics on Granville Island

Granville Island bears a rich, long history that continues to this day. During the 1880’s when it was first mapped, it was just a sandbar in the middle of False Creek.

In 1915, the entire island was stabilized and newly terraformed using fill material dredged from the channel, and it quickly became an industrial centre for factories and production (many of which manufactured supplies for the 2nd World War).

The 1970’s were important because it was redeveloped into the hub for food, retail and entertainment that we now know, repurposing many of the old factories into retail spaces. 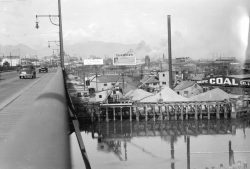 Those who set foot on Granville Island instantly recognize the timeless, vintage aesthetic it bears. At Para Space, we believe that the landscapes should reflect the island’s classic yet comfortable feel.

So, we’ve done our absolute best to make sure that the millions of tourists and locals who visit every year feel welcomed, intrigued, and inspired by a modern landscape that remains true to the history of Granville Island and the topography of Vancouver.

What We’ve Done on Granville Island

Take a look at some of the exciting projects we’ve tackled on Granville Island since we started here!

We were tremendously excited to spend three weeks redesigning and reviving the landscape along the pond, which is one of the first areas most people see as they enter the island!

This was a two part redesign. Our first task was to convert two unused patches of lawn into garden boxes overlooking the east side of the pond along a popular bicycle path. 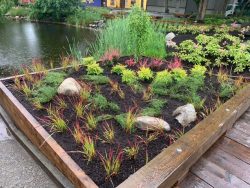 Our second task was to install a wall of granite boulders along the pond’s west end, then subsequently redesign and plant hundreds of fresh shrubs, grasses, and perennials, converting an otherwise bare landscape into one that now looks opulent, lively, and energetic –  matching the vibrancy of the island itself. 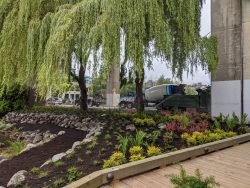 An extremely popular area for families with children, Granville Island’s playground and waterpark see virtually non-stop foot traffic due to its proximity to False Creek Community Centre and several walking and bicycle paths. Our goal here was to remove several muddy and unnecessary patches of lawn and replace them with a functional, full landscape that’s nonetheless safe for children.

Featuring hardy shrubs and grasses, accent boulders, and stepping stones, the playground upgrade has proven to be a big hit for families! We believe that as the landscape continues to grow over the years, the popularity of the area will grow alongside it. 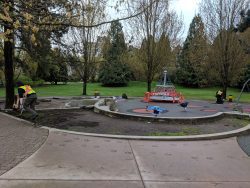 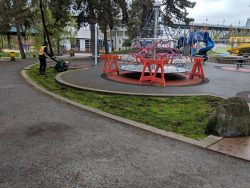 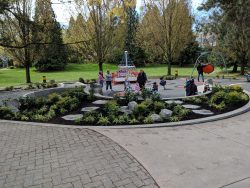 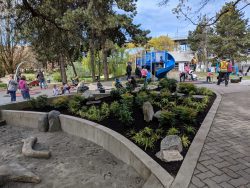 Because Granville Island’s streets run in a loop, there’s only one thoroughfare onto and off of the island, which bypasses several concrete garden beds near the island’s entrance. In order to create a lasting first impression for visitors, we fully redesigned these prominent beds to feature boulders, river rock, grasses, and colourful summer and winter annuals. 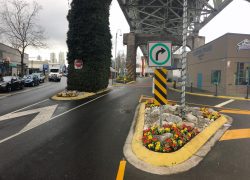 True to the classic feel of its urban architecture, Granville Island’s wine-barrel annual displays are an attraction unto themselves! Updated twice yearly with summer and winter-appropriate annuals and perennials (and maintained meticulously by our Plant Health Care division), there are over 120 barrels spread evenly over the island that each offer unique colours and textures to commercial centres. 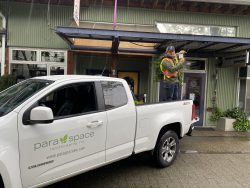 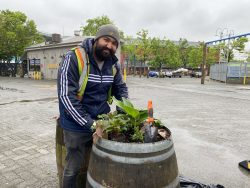 Granville Island is a very large area with a broad variety of plant life. Fortunatly, our maintenance crews keep rising to the occasion! When we first came to Granville Island in early 2019, we spent over a month fully pruning all the island’s plants, weeding, cleaning all garden beds, and installing fresh soil (which we continue to do on a yearly basis). Now, our weekly maintenance crews continuously do spectacular work maintaining the island’s many lawns, parks, and plants.

Granville Island is constantly looking toward the future – even now, redevelopment plans continue. At Para Space, we like to look toward the future too. To that end, we’re very excited to be given the opportunity to continue being of service to Granville Island as it evolves. It’s an ongoing privilege to be even a small part of such a rich slice of Vancouver history!

We look forward to years of continued upgrades and installations. More importantly, though, we hope you enjoy your visit!